This tour includes history of the three periods of Lima. it also includes the gastronomic Tour where you can discover the magic gastronomy of the coast of Peru.

We will begin our gastronomic experience visiting the local market where we will appreciate a great variety of products used in the Peruvian cuisine.

The market we will visit is Surquillo, if requested and as a private option we could visit the fishing terminal of Villa El Salvador.

Inside the market of Surquillo we will appreciate a great variety of Peruvian products at the same time we will try some peruvian fruit such as Lucuma, Aguaymanto, Chirimoya, Pacae… We will observe a wide variety of land and Peruvian sea products which is considered as one of the richest of the world.

Right after visiting the market, we will go to a very tradidional and exclusive restaurant in the district of Miraflores where the Chef will welcome us with a “Pisco Sour” cocktail.

Finally we will try the best and most representative dishes and desserts of the Peruvian cuisine. After lunch it is time to explore the city and its history.

We will introduce you into the three periods of history of our Capital City: Pre Hispanic Lima, Colonial Lima and Modern Lima.

Our tour begins with a panoramic view of the Huaca Pucllana, Pre Inca ceremonial center. We will continue our tour by the Historical Center of Lima, where monuments and colonial buildings will be appreciated, highlighting El Paseo de la Republica, San Martin Square, La Plaza Mayor, The Government Palace. The City Hall, The Archbishop Palace, The Basilica Cathedral and others.

We will take the time to get into the famous Hotel Bolivar, one of the oldest of the city where we will have an exhibition of the dome and its details.

There we will learn how to prepare the famous, emblematic and delicious cocktail “Pisco Sour” with an expert bartender of the hotel.

The Hotel Bolívar was the best of the old times, it was also very famous because of its Pisco Sour, that even had passed the one of the Hotel Maury, its competition hotel, only some blocks away. The very Catholic people attending to mass in the Cathedral, finish strolling, they eventually met in San Martín Square, especially at the same doorway of the Hotel Bolívar, So they found a justified reason to enjoy a delicious Pisco Sour.

We will finally visit the most traditional residential zones of Lima.

Our tour begins with a panoramic view of the Huaca Pucllana, Pre Inca ceremonial center. A magnificent ceremonial archaeological center built in the IV century A.C. and considered a Sacred Town by the Incas. 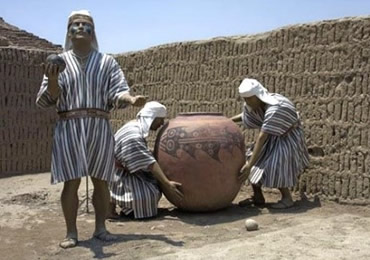 We will visit the historical center of Lima, where monuments and colonial buildings will be appreciated, highlighting The Paseo de la Republica, The San Martín Square, The Plaza Mayor, The Government Palace, The Archbishop Palace, The Basilica Cathedral of Lima, BCR Museum The “Collection of treasures of Perú”, a select exhibition of objects of gold, ceramics and textiles from different Pre Colombian civilizations. 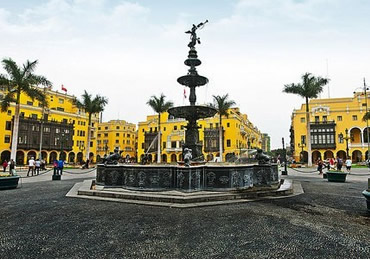 The Religious Convent of San Francisco and its Catacombs

Which has the largest displays of religious colonial art in America. The visit to the Underground Crypts known as the "catacombs" is highlighted as well.      . 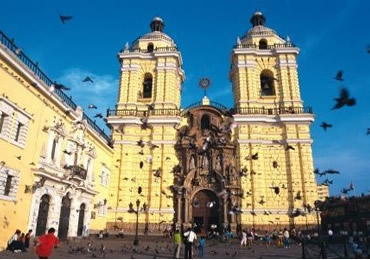 Lima is a modern, colonial and ancestral city. It has the Costa verde with its long promenades running beside the pacific ocean. You will be able to visit amazing landscapes, beaches, the countryside, fauna in abundance that will let you get in touch with the nature and the Pacific Ocean.

It is recommended to take with you: